You are here: Home / Instructional Article / Heelside
A heelside backroll is typically the first invert we will teach at camp, and is a right of passage for moving into the world of inverts. This trick is basically a side flip, or cartwheel type motion.

When I learned this trick the hardest part for me was taking the exact same approach to the wake on every attempt. You will want to land on the exact same spot of the wake each time; right on the downslope of the second wake. I think it helps to have heelside wake-to-wake 180s dialed in before attempting inverts because they help teach edge control towards the wake. Also, if you can spend a little time on the trampoline it will make your first couple of attempts much easier on the water.

Slow the boat down 2-3 MPH from normal boat speed. A big mushy wake will force the rider to edge all the way to the top of the wake before throwing the trick, and the slower speed will take away some of the fear of trying something new. On the first few attempts by the rider, just concentrate on initiating the trick correctly off the wake and landing in the water of both wakes.

After trying a couple of slow speed attempts, bring the boat back up to normal speed and go for the trick wake-to-wake. Use a normal heelside wake-to-wake cut. It’s very common for people to throw this trick early, or before they are off the wake, so concentrate on edging all the way to the top of the wake before throwing the backroll.

These are the areas most people have difficulties when learning backrolls.

I’m under rotating this trick. There are generally two mistakes that will cause this:

Throwing the trick too early.
Solution: Practice some more slow speed one wake attempts where you begin to make the complete flip rotation and land in the middle of the wake.

Bringing the handle up towards your face.
Solution: Push the handle toward your hips after you initiate the flip.

The handle pulls out of my hand when I land.
Solution: This is caused a lot of times by the bad habit of letting go with your rear hand in the air. Hold on with both hands and pull the handle in halfway through the flip. You can also have your driver cut back on the throttle the first few times you land this trick. 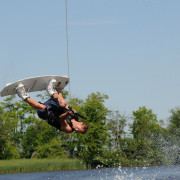 A lot of riders overlook learning Front flips, but they’re not as awkward as you think, and they’re sure to get a head nod from people that are in the know.

Throwing the Front Flip:
The rotation should be similar to a cartwheel, end over end. I’m doing this on the trampoline, and I ride right foot forward.

1. At the top of the wake, throw your head and lead shoulder toward the tip of the board.
2. Keep the handle low, and near your front hip.
3. If your nervous about trying your first one, have your driver slow the boat down by One to Two MPH.
4. Keep your elbows up when you land to avoid the dreaded elbow to thigh Charlie horse.
5. You can see the water as you come out of this trick, which always makes landings easier.

Throwing the Front-to-Fakie:
When you are confident with doing Heelside Fronts, it’s time to take it to Fakie. Take the same approach, but let go with your leading hand when you initiate this trick off the wake. Also, at the top of the wake, push your rear shoulder toward the boat to put the 180 spin into it.

Doing a Frantrum, a Tantrum Front-Flip Mix?
This is generally caused by the way you initiate the trick off the wake. Concentrate on keeping your trailing shoulder square and pushed forward toward the boat.
Also, when people do a Tantrum they typically will bring the handle up as they let go with their trailing hand. So when they go for a Front Flip they have the same natural tendency, which turns it into an ugly Frantrum. Keep the handle low, near your front hip, and hold on with both hands all the way through the trick.

Butt Checking on the Front-to-Fakie
This is caused from not rotating the 180 enough. Push the handle behind your front hip as you come down to help with the 180 rotation. Avoid the tendency to throw the trick early off the wake, try to take it straight up.